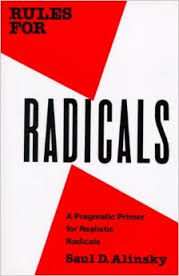 The core principles in “Rules for Radicals” are:

RULE 1: “Power is not only what you have, but what the enemy thinks you have.” Power is derived from 2 main sources – money and people. “Have-Nots” must build power from flesh and blood. (These are two things of which there is a plentiful supply. Government and corporations always have a difficult time appealing to people, and usually do so almost exclusively with economic arguments.) (3)

RULE 2: “Never go outside the expertise of your people.” It results in confusion, fear and retreat. Feeling secure adds to the backbone of anyone. (Organizations under attack wonder why radicals don’t address the “real” issues. This is why. They avoid things with which they have no knowledge.) (4)

RULE 3: “Whenever possible, go outside the expertise of the enemy.” Look for ways to increase insecurity, anxiety and uncertainty. (This happens all the time. Watch how many organizations under attack are blind-sided by seemingly irrelevant arguments that they are then forced to address.) (5)

RULE 4: “Make the enemy live up to its own book of rules.” If the rule is that every letter gets a reply, send 30,000 letters. You can kill them with this because no one can possibly obey all of their own rules. (This is a serious rule. The besieged entity’s very credibility and reputation is at stake, because if activists catch it lying or not living up to its commitments, they can continue to chip away at the damage.) (6)

RULE 5: “Ridicule is man’s most potent weapon.” There is no defense. It’s irrational. It’s infuriating. It also works as a key pressure point to force the enemy into concessions. (Pretty crude, rude and mean, huh? They want to create anger and fear.) (7)

RULE 6: “A good tactic is one your people enjoy.” They’ll keep doing it without urging and come back to do more. They’re doing their thing, and will even suggest better ones. (Radical activists, in this sense, are no different that any other human being. We all avoid “un-fun” activities, and but we revel at and enjoy the ones that work and bring results.) (8)

RULE 7: “A tactic that drags on too long becomes a drag.” Don’t become old news. (Even radical activists get bored. So to keep them excited and involved, organizers are constantly coming up with new tactics.) (9)

RULE 8: “Keep the pressure on. Never let up.” Keep trying new things to keep the opposition off balance. As the opposition masters one approach, hit them from the flank with something new. (Attack, attack, attack from all sides, never giving the reeling organization a chance to rest, regroup, recover and re-strategize.) (10)

RULE 9: “The threat is usually more terrifying than the thing itself.” Imagination and ego can dream up many more consequences than any activist. (Perception is reality. Large organizations always prepare a worst-case scenario, something that may be furthest from the activists’ minds. The upshot is that the organization will expend enormous time and energy, creating in its own collective mind the direst of conclusions. The possibilities can easily poison the mind and result in demoralization.) (11)

RULE 10: “If you push a negative hard enough, it will push through and become a positive.” Violence from the other side can win the public to your side because the public sympathizes with the underdog. (Unions used this tactic. Peaceful [albeit loud] demonstrations during the heyday of unions in the early to mid-20th Century incurred management’s wrath, often in the form of violence that eventually brought public sympathy to their side.) (12)

RULE 11: “The price of a successful attack is a constructive alternative.” Never let the enemy score points because you’re caught without a solution to the problem. ( If you’re not part of the solution, you’re part of the problem. Activist organizations have an agenda, and their strategy is to hold a place at the table, to be given a forum to wield their power. So, they have to have a compromise solution.) (13)

RULE 12: Pick the target, freeze it, personalize it, and polarize it.” Cut off the support network and isolate the target from sympathy. Go after people and not institutions; people hurt faster than institutions. (This is cruel, but very effective. Direct, personalized criticism and ridicule works.) (14)

The research papers that I wrote supporting the content of this research blog were written in 2013 and 2011. Here is the story behind their creation. After completing them I had to make a decision on what I was going to do next. In the process I was reminded of a Noam Chomsky quote:

“My own concern is primarily the terror and violence carried out by my own state, for two reasons. For one thing, because it happens to be the larger component of international violence. But also for a much more important reason than that; namely, I can do something about it. So even if the U.S. was responsible for 2 percent of the violence in the world instead of the majority of it, it would be that 2 percent I would be primarily responsible for. And that is a simple ethical judgment. That is, the ethical value of one’s actions depends on their anticipated and predictable consequences. It is very easy to denounce the atrocities of someone else. That has about as much ethical value as denouncing atrocities that took place in the 18th century.” (15)

Essentially what Chomsky is saying is that if you are citizen of a country doing things that you consider to be wrong, it is your responsibility as a citizen to work towards resolving those problems.  Some people like Ted Kaczynski (The Unabomber) and Bill Ayers (The Weather Underground domestic terrorist) interpret this as a license to cause death and property destruction.  Myself and people who are not insane see those actions as complete negative manifestations of activism and perversions of logic.  It’s easy to point the finger, but taking responsibility for oneself and ones own actions during a time of confusion and chaos is all one can do.

Personally, I had a high degree of confidence in my research and the question became what was I going to do about it. I could have tried to publish a book, done nothing, sought journal publications, submit opinion pieces to newspapers etc. etc. but I don’t know anything about those things.  Those actions require prestige, which I have exactly none of.  I decided the only thing I could do was to stick to what I know: Applied Research.

Applying research of this nature against a group of blue ribbon intellectuals, attorneys, politicians, and bureaucrats is almost guaranteed to be trip to hell and back. Especially for someone who is a rookie at political activism.  The best chance I had was to get the upper hand first, keep the advantage, show no mercy, and do so by applying their own rules, research, and tactics against them.  I already had one advantage, many of these intellectuals had already engaged in one on one conversation with me over email about my research.  See those contributions here.  My foot was already in the door, so I decided to use the rest of my body to give this group a less than subtle nudge.

Before going into detail on what I did and how I did it, in my next post I want to quickly discuss the differences between “Trumanites” and “Madisonians” as it relates to the theory of double government. It’s a small lesson in how elected politicians act/react vs. how the life long bureaucrats act/react on a daily basis to crisis. This knowledge helped me prepare for potential responses to my activism efforts that would be indirect and more subtle.  The reason this is important is because followers of Alinsky rarely engage directly in conversation with their adversaries, unless there is a politically advantageous reason to do so. Engaging directly would humanize their opponents, and the job or goal of followers of Alinksy is to demonize their opponents.

In my next post lets look at what Michael Glennon, Professor of International Law at The Fletcher School of Law and Diplomacy, says about National Security and Double Government (Trumanites vs. Madisonians).

1 Response to Thoughts – Rules for Radicals